CUDOS leading the town carol singing at the Christmas lighting up. 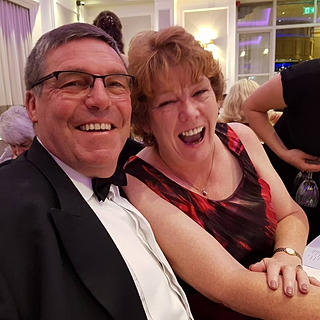 Let me know what you think of the draft new website.

How often do CUDOS perform a play with an advisory warning that it is not suitable for children?! I love this play and am so lucky to be performing with such a talented cast. This play will make you laugh, cry and wince at the non-PC bits (and then laugh and cry some more). Hope to see you at the bar at the end - we will all be needing gin! #Theatre #upcomingevents #performance
100
Crewkerne Headlines And Topics

REHEARSALS FOR NEXT PRODUCTION BY CUDOS WELL UNDERWAY: Rehearsals for the next stage production by Crewkerne United Dramatic and Operatic Society (CUDOS) are well underway. The comedy drama 'Bazaar And Rummage' was written by the widely talented English writer and humorist Sue Townsend, famed for her Adrian Mole series of diaries. The play was first presented on stage at the Royal Court Theatre, London in 1982. CUDOS' production, with additional lyrics and music by Shirlie R
120

Back Stage Set build is a time when we all need to pull together to create our set. Come on down and

CUDOS was formed from the unification of Crewkerne Players and Crewkerne Amateur Operatic Society in 2001. The new society has moved from strength to strength and is well regarded in Somerset gaining many awards and nominations in the Somerset Federation of Drama competitions for plays, musicals and pantomimes. #upcomingevents
630

What do we do

Every year we stage a pantomime in January, a play in May, a musical in September and a concert in December. The CUDOS family is a great group to be a member of. We host several social functions throughout the year all of which are we attended. There are many ways to get involved with CUDOS the first step is to become a member of our friendly society 01460-74380 for details. #audition #Theatre
140

CUDOS (Crewkerne United Dramatic and Operatic Society) as the name suggests is based in Crewkerne and we put on four shows a year in the Victoria Hall. They are all great to be part of, not to mention a hit with our audiences. #Theatre #performance
120